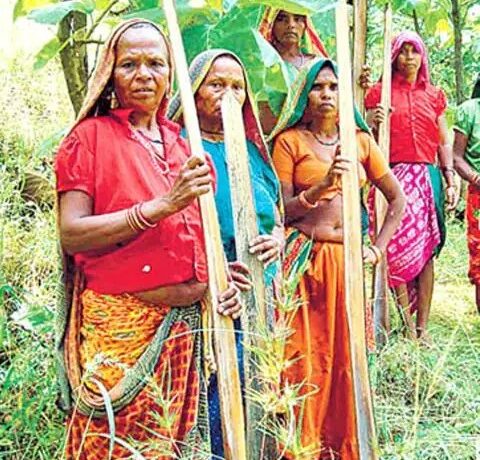 According to Article 17 of the Universal Declaration of Human Rights, “Everyone has the right to own property alone as well as in association with others; No one shall be arbitrarily deprived of his property.” The Human Rights Resolution 2005/25 calls for women to have equal access to, and ownership of, land. It also promotes the idea that everyone should have the same opportunity to own property and live in decent housing in order to reach their full potential. One of the most contentious rights is the right to property, particularly the right to inherit property, because it is linked to a country’s political, economic, cultural, and religious beliefs. Less than 2% of women in rural India inherit landed property. (Lahoti, 2016)

While women on the one hand have always been in the disadvantageous position in owning land or any type of property, tribal women in particular are structurally and socially deprived of this right. For instance, the Girasias, a tribal group in Rajasthan, use the fact that women relocate from their natal villages to their affinal villages after marriage to justify the lack of property ownership by women. (Unnithan,1997)

In primitive tribes, it is considered taboo for women to touch or use the plough. This deprives them of control over the means of production—the land. For instance, the traditional norms in the Oraon and Ho tribals of Jharkhand prevent women from holding the plough, thus denying them access to land. Here the role of taboo becomes evident for the lack of access to land for women. (Kishwar, 1987)

The tribal tradition or, to be more accurate, customary tribal law is one of the many issues that affect tribal women in Jharkhand. As per this customary law, that lineage, not an individual, owns the property in many indigenous tribes. Individual families are allowed to use the property, but it cannot be sold or otherwise transferred outside of the family. Due to this custom, it is viewed as inappropriate and at odds with the tribal ethos for women to express their desire for a share in land ownership.

Marrying indigenous women is one method used by non-tribal people to obtain tribal land. This fear has been instilled in the minds of the tribes that inhibit them from transferring land ownership to tribal women. To corroborate this, K.S. Singh highlights the high rate of alienation of tribal land among the Hos of Singhbhum through marriage to tribal women. He also points out that often after such transactions the tribal women are deserted by non-tribal men. (Singh, 1988)

The economics of land size is also connected to opposition to women’s property rights. Arguments in favor of women’s entitlement will cause more land to be divided and fragmented, which will have a negative impact on the viability and efficiency of farms. (Xaxa, 2004)

According to a study by Shil and Jangir (2021), there are three different types of land ownership for tribal women: joint pattas on land, inherited property, and land purchased in their names. The findings revealed that 20 women (33 %) of the 59 married women in the sample from the rural West Tripura district have inherited property. 25 women, or 42% of the total, have been given joint pattas of forestland. Nine women (15%) remain in the Khash territory. None of the women have purchased land. This shows that the purchasing power of tribal women is very low and it is costing them their economic independence.

Women inherit different sorts of landed property, which also reflects gendered norms. Typically, women’s part of parental property is inferior land (Agarwal, 1994). Land is more likely to stay in the hands of the natal family in communities whose girls are permitted to marry within the immediate family or cross cousins. As a result, it is common in these communities for girls to inherit less property or to be required to work in the fields (Agarwal, 1994)

While positive changes on gender parity are taking place in non-tribal societies and mainstream media, the information on gender in tribal societies is scant. Given that some tribal communities like Lenape and Hopi are matrilineal, while others like Gond and Ho have a strong patriarchal influence, this diversity makes it challenging to draw generalizations about the status of women in India’s tribal communities as a whole. The best way to characterize what has been seen is as illustrative and heuristic.

Therefore even if the data or information on the trends and pattern of land ownership by tribal women  is not available, policymakers can try to address the socio-cultural aspects that are hindering the rights of women to be landowners.

Firstly, the tribal women can be nudged to marry outside their community or clan (not necessarily outside the tribe) so the ownership of land from the natal family is transferred to her as against only the cultivation rights she would receive if she marries within the community. This can be done by creating awareness about the increased risk of autosomal recessive genetic disorders that surface when people with highly similar ethnicity marry each other.

Women can more effectively establish their right to inherit owing to their understanding of legislation, legal rights, and administrative processes related to land claims. Education also improves a person’s self-confidence, awareness of new farming technologies and techniques and bargaining power. Therefore state-run schools and colleges in tribal areas should emphasize more on legal and financial literacy of women.

Along with gender sensitivity programs, focus should be on capacity building as advocated by nobel laureate Amartya Sen. Special courses in agriculture, revitalization of indigenous ways of farming with new technology should be offered to tribal women. This will help them take control of their land, life and livelihood.

This article is published under Blog4Land series by PRRC and the views expressed are of the author and PRRC does not endorse it.

About the Author: Vedika is a Master’s student in Public Policy at Christ (Deemed to be University), Bengaluru.