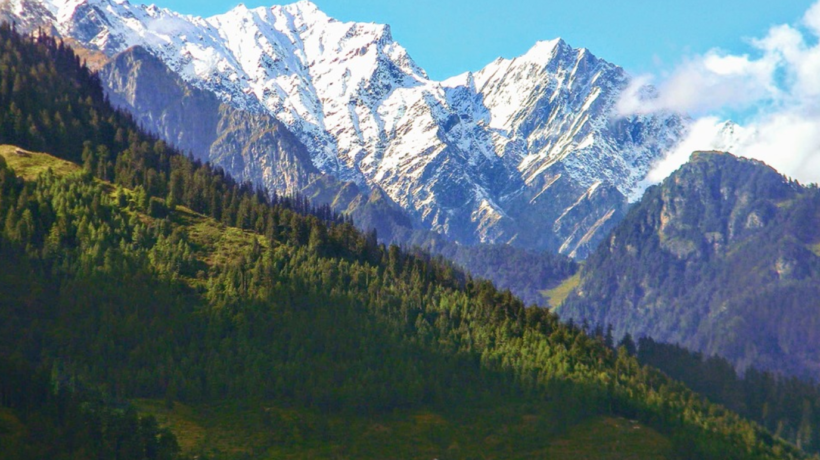 Forests become an easy scapegoat for urban infrastructure development. Recently, the National Highways Authority of India blamed meteorological events for triggering landslides in Himachal Pradesh, but such events are not the only cause of environmental degradation.

With the reckless cutting of 23, 785 trees to four-lane the Shimla-Kalka highway and excessive cutting of thousands of other trees to facilitate several hydroelectric projects, it is evident that excessive human activity in Himachal Pradesh is leading to degradation and deprivation of forest quality, which, ironically, would only impede the development that the state is hoping for.

The recent water woes in Shimla in which most areas of the city received water supply only once in eight days, and tourists were requested to avoid visiting the city, is one such example. Several news reports have documented how the drying up of the city’s water sources led to a consistent decrease in water supply quantity, while the city’s population keeps growing.

It is well-established that one of the major factors for these disappearing water sources and reduced rainfall is the loss of surrounding tree cover. The story of Shimla is likely to be repeated across the state, unless some pragmatic measures are taken.

In the face of rapid urbanisation, states need to compensate for the over- extraction of ecosystem services especially forest resources, by their large urban centers. A city does not exist in isolation from its surrounding region, and Participatory Forest Management (PFM) at the regional scale is one of the methods to achieve sustainable urbanisation. It is essential to not only escalate plantation drives and undertake compulsory compensatory afforestation as part of development projects, but also design programmes that are sustainable, people-friendly and self-driven. In doing so, taking care of the needs of the local community stands as a prerequisite to success.

The record so far

Since 1993, there have been several initiatives adopted by the State government of Himachal Pradesh in collaboration with international development agencies such as the World Bank and JICA to execute Joint Forest Management (JFM) programmes aimed at increasing the State’s green cover.

According to the India State of Forest Report (ISFR, 2017), the total forest cover in Himachal Pradesh has increased by 1% since 2015. However, today, after more than two decades, there are only approximately 635 active JFM committees within the State. This number has dropped from 963 active JFMCs in 2014.

According to many forest fringe communities, this increase in the number of inactive JFMCs has primarily been due to the lack of willingness among people, aggravated by erratic financial support from the Forest Department. Rapid urbanisation leading to less dependency on forests and drastic changes in climatic conditions are other factors leading to an increase in the number of non-functional JFMCs. Clearly, this requires a cross-examination of the socio-political conditions and the existing legal framework within the State.

An inclusive, rather than a top-down bureaucratic approach might prove worthy in the success of JFM. Involvement of stakeholders in the mere execution of forest programmes, originally prepared by the forest department, does not seem promising. Participation of villagers in the initial stages of developing micro-plans can lead to empowerment of locals by instilling a sense of ownership, planning and decision-making. Granting ownership rights to forest dependent communities may facilitate greater participation by involving more people in JFM activities.

Representation of women and members from vulnerable communities such as SCs and STs is critical in determining the success of JFM programmes. Taking into consideration indigenous knowledge required for planting native varieties is also essential. Gram Panchayats should be involved in selecting the sites and plant species for afforestation.

In addition to existing forest conservation programmes, awareness campaigns and subject specific training programmes will not only contribute to capacity building but also ensure improved practices and dignified livelihoods. There is a need to put in place monitoring and evaluation, and a system of social audit to assess the ecological, social and economic impact of such programmes.

An evaluation of the extent to which adoption of the legislative framework has responded to the needs of the local people is another significant realm. Preference should be given to the needs of the local communities, which is the intent of the law. The salient features of the State JFM Notification (1993) and PFM Rules (2001), over time, might create a mismatch with the evolving needs of people and changing land and climate conditions due to overexploitation of forests for infrastructure development and urbanisation.

External aid pumps much-needed fiscal support into the existing forestry framework in Himachal Pradesh. However, the success and effectiveness of a donor-driven initiative largely depends upon its ability to engage people in forest management activities and ensure continued collaboration between forest department and local communities, even after the life of the project. In the past, lack of consistency in the execution of forest conservation projects and absence of sustainable participatory afforestation practices have compromised the very agenda of the forest department.

This year, in February, the Supreme Court partially removed a ban on green felling in Himachal Pradesh by allowing limited silviculture felling across three districts. Partial removal of this blanket ban after more than two decades will allow regeneration, felling, and thinning of trees, thereby promoting the health of the forest.

Entitlement to a significant share in financial gains received from the sale of timber is another incentive. The extent of participation in co-management of forests, including integration of village micro-plans into Forest Department’s Working Plans, will play a vital role in long-term sustenance of conservation and regeneration activities.

In addition, the present State government in an effort to increase the forest cover recently introduced three forestry schemes—Samudayik Van Samvardhan Yojna, Vidyarthi Van Mitra Yojna, and Van Samridhi, Jan Samridhi Yojna—with a special emphasis on promoting Participatory Forest Management. The proposed schemes will allocate plots in forest land to local people for plantation of useful species and to schools to carry out afforestation activities. These are welcome initiatives and shall go a long way in increasing forest cover.

Given the proven role of forests in filtering pollutants, regulating rain and water supply and restricting flooding, these measures will, in turn, significantly enhance the resilience of those very cities that are often prioritized over forest conservation and management. However, the onus for success of all such programmes rests on the capability of the Forest Development Agencies and JFMCs to sustain and continue conservation practices.

Hansika Seth is an Associate at the Indian Institute for Human Settlements. She is trained as a Sociologist and a Social Worker, and has worked on issues of land rights, gender and Right to Education. At IIHS, her work focuses on land record management including institutional policy questions on land ownership, land use and the political economy of land.